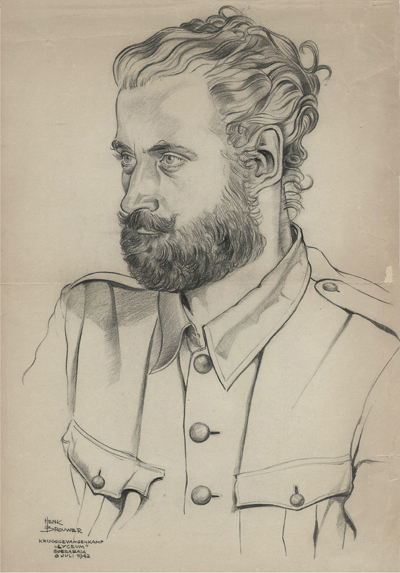 When, in the late 1930’s, the Dutch Jan Tjitte Wiersma (Amsterdam, 1907) departed for the Dutch East Indies, he didn’t have a clue of the tough years that awaited him. He hoped for a good life in the Dutch colony, together with his wife Ietje Siderius. In 1938 he became a physics teacher at the Lyceum in Surabaya; in 1941 their daughter Ank was born. The Japanese occupation of the Dutch East Indies put an end to Wiersma’s fairy tale. Mid 1940 he passed the medical examinations and at the end of 1942 landstorm soldier Jan Tjitte Wiersma was sent to Fort Menari, the relatively unknown pow-camp where, at that time, Henk Brouwer was held captive as well. In Fort Menari, Wiersma was portrayed by Henk Brouwer twice: a portrait and a cartoon. It was in this camp that Wiersma met his wife and daughter for the last time. Autumn 1943, after imprisonment in several pow-camps on Java, Wiersma was finally brought to Fukuoka, in the north of Japan. There he did forced labour in one of the many labour camps. The hard work was at the expense of his health. He suffered of dysentery and pneumonia. Shortly before the liberation the big fellow of 90 kilos that Wiersma was, weighed no more than 59 kilos.

In October 1945, Wiersma sent a message to his family, to let them know that he was still alive. Shortly after he learned that his wife Ietje had passed away in 1943, at the age of 37, in one of the civilian internment camps, suffering of dysentery.

After the reunion with his five year old daughter – he hadn’t seen her for four years – Jan Tjitte Wiersma went to Holland. But it didn’t take long before he decided to go back, leaving his little daughter to the good care of his family. But the circumstances in the Dutch East Indies were bad, there was barely enough food and he couldn’t find a suitable house. After a few years he remarried. But his new wife had also suffered a lot from the war. The marriage ended and in 1950 Wiersma decided to go back to the Netherlands for good. He became a teacher at the H.B.S. in Amsterdam. On 25 March 1965, at the age of 58, Wiersma died.