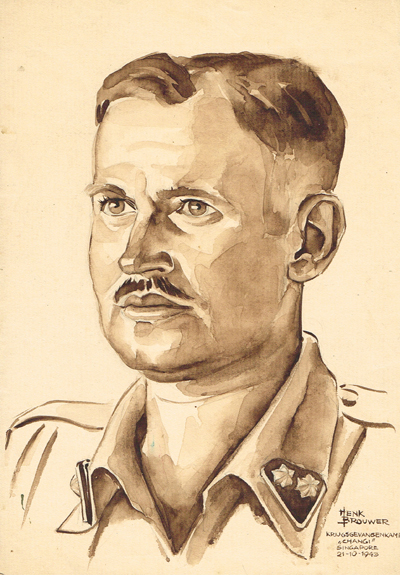 Okke over de Linden was born 11 May 1911 in Semarang, the Dutch East Indies. When he was eight years old, he and his family moved to the Netherlands. Okke, a sporty young man, finished his study at the Royal Military Academy in Breda in 1935. He became a KNIL-officer and one year later, after he had married Jopie Wijnstok, the couple left for Batavia (Jakarta), where Okke started his military career as Second Lieutenant in Meester Cornelis, one of Batavia’s suburbs.

When the Second World War reached the Indonesian territory, Okke Over de Linden fought the Japanese in the east of Java, in Bodjonegoro. After the capitulation he became a prisoner-of-war (pow), first detained in Malang. He passed several prisoner-of-war camps and ended up in Changi, where he met Henk Brouwer, who painted Okke’s portrait. In Changi Over de Linden joined a group of artistic pow’s, among who Henk Brouwer and Kees van Willigen. That is when Okke started drawing and painting himself, an activity that he wouldn’t give up for the rest of his life.

On 6 November 1945 Okke Over de Linden landed with his military unit of former pow’s at Billiton-island. That is where, a few months later, he was reunited with his wife and son. In May 1947 his wife and son went back to the Netherlands for health reasons; six months later Okke joined them. He arrived two months after their daughter Joseline was born.

Until 1958 Okke Over de Linden worked for several air force divisions and became deputy head of the Bescherming Bevolking (Civilian Protection) in Gorinchem. In 1962 he emigrated with his family to New Zealand, where Okke died on 11 April 1997 at the age of 86.

Okke over de Linden is one of the main characters in Art de Vos’ historical novel Gordel van Geweld (2018). Art de Vos contacted the descendants of Over de Linden in New Zealand, after which he got old of the portrait. Okkes daughter Joseline still lives in New Zealand. She described her father as a bon-vivant, who loved painting, breeding plants, trout-fishing and maintaining close contacts with his fellow-veterans. “My father was very talkative. He got along well with everyone. He had firm ideas and was very loyal and honest. And always gentlemanly dressed.”