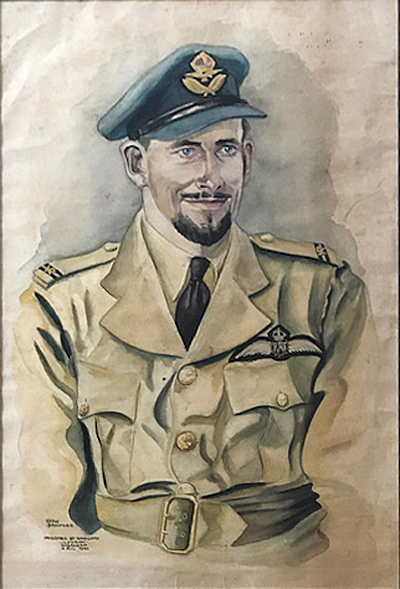 Andrew Ross Haddow was born 5 November 1916, in Glasgow, Scotland. As a young boy he and his family moved to Edinburgh, where he was educated at The Royal High School. On leaving school he was employed by the Dunlop Rubber Company.

Haddow always had the ambition to become a pilot. Therefore, at the age of 22, he joined the Civil Air Guard, where he learned the theory of flight and navigation.

On 28 October 1941 Haddow married his beloved Laura. Only a few months later, when the Japanese occupied the Dutch East Indies, flying officer Haddow disembarked with the 605 County of Warwick Squadron, heading for the Far East. The couple wouldn’t meet again until after the end of the war. For the majority of the time Laura didn’t know whether her husband was dead or alive.

Almost immediately after their arrival on Java, Haddow and his fellow pow’s were taken prisoner of war. That was the beginning of a period Haddow would later characterize as “three and a half years of sheer physical and mental hell”. During the first six months he passed three camps, among which POW-camp Lyceum in Surabaya, where he met the Dutch Henk Brouwer, who painted his portrait. These three camps had been bearable. But for the next three years, mostly spent in the notorious prison camp on the island Haroekoe, everything changed: “Life (…) was at its lowest with survival the essential outlook.”

Haddow survived the war, unlike many of his fellow-pow’s. On his return home he resumed his work with Dunlop and stayed there until his retirement. He then moved to Castle Douglas in south west Scotland. In 1997, at the age of 81, he wrote a short book about his experiences as a POW in the Far East, a book that his niece Laura Williamson kindly sent us. In this book, he mentions being painted by Henk Brouwer.