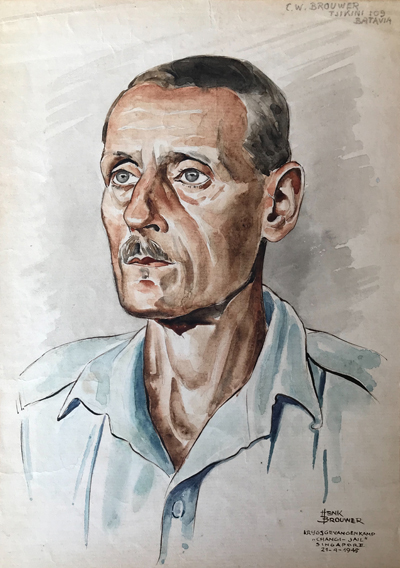 The Dutch Cornelis Willibrordus Brouwer was born in Delft in 1897, descendant from a butchersfamily. Cornelis – he has no family relation to Henk Brouwer – was an entrepreneurial man. After finishing the elementary technical school in The Hague and his military service, he set out for the Dutch East Indies. There he had several jobs and continued studying: first mechanical engineering, then English and trade knowledge at a teachers training college. In 1929 he married Evelien Flikkenschild, daughter from a catholic Indonesian family with Dutch, German, English and indigenous roots. From this marriage nine children were born.

Like many other men Cornelis was enlisted for the Royal Netherlands East Indies Army in December 1941 and became a Landstorm sergeant. As prisoner of war he was held captive in Bandung, Tjilatjap, Tjimahi, Batavia and Changi, Singapore. In these camps he made rosaries of legume seeds (saga rambat or sogok toenteng) that were placed next to the bodies in the graves of the deceased. His suffering from dysentery helped him to avoid forced labour at the notorious Birma Siam (or Death) Railway.

After the capitulation of Japan Cornelis Brouwer ended up in Camp Wilhelmina, Singapore. In December 1945 he flew back to Batavia, where he started working as a teacher in several secondary schools. In 1953 Cornelis retired and went back to the Netherlands for good. In 1982 Cornelis Brouwer died in Amsterdam. His portrait also survived the war and now proudly decorates the living room of one of his daughters.