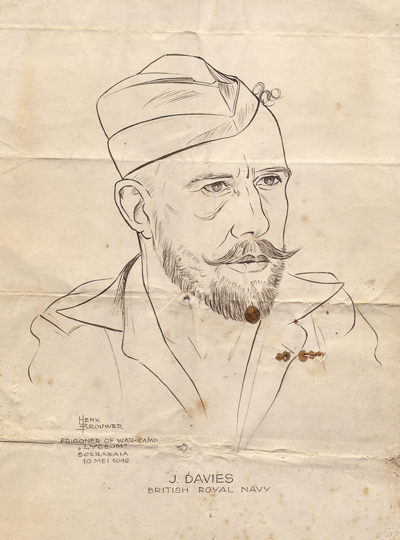 Joseph Edward Davies was born in 1906 in Connah’s Quay in North Wales in the UK . As a young boy he worked as a grocer’s assistant, but he joined the Royal Navy in 1923 at the age of 17. He spent the four years preceding WWII on the China Station. Later he served on HMS Electra (H27), one of the 9 E class destroyers built for the Royal Navy in the 1930’s. In the early part of the war, HMS Electra operated as a convoy escort in Europe, but sailed towards the Far East in 1941 to form part of the nucleus of an Eastern fleet based at Singapore, designed to deter Japanese aggression in the area.

On 27 February 1942 HMS Electra left Surabaya as part of the fleet that set sail to engage the enemy in what became the Battle of the Java Sea. During the engagement with the enemy, the ship took several hits and listed towards port. The ship sank that same day, bow first and with the white ensign still flying. That night 54 survivors of the 173 crew on board were picked up by a US submarine and taken to Surabaya. After treatment in a Dutch hospital 42 of the survivors were taken to Australia. Following a short period of recuperation in Australia in early May, the 42 survivors were put on the Australian liner Nankin, which was bound for Ceylon via Bombay. On this voyage, the Nankin was attacked and sunk by a German cruiser. The survivors of this attack, including the survivors from the Electra, then spent seven weeks on the German supply ship Regensberg and were subsequently handed over to the Japanese and were transferred to various prisoner-of-war camps across the region.

It was while he was in the prisoner-of-war camp “Lyceum” in Surabaya in Java that Joseph must have met Henk Brouwer. The portrait that Henk Brouwer made of him is dated 10 May 1942 and is as such one of the earlier portraits we know of. It is a very rare example of a Brouwer portrait, drawn with ink. In the following months and years, ink would become very scarce.

Joseph Davies died in September 1942 while still imprisoned, presumably as a result of hunger or disease or ill treatment from the Japanese guards in the camps. His portrait was, presumably with his other personal effects, sent back to his family in the UK. It subsequently passed down to Joseph’s younger brother James and stayed in the family. The portrait is badly creased, having been folded and kept in a pocket. It also has some discolouring due to its age. It is currently kept framed, together with Joseph’s war medal ribbons, and is proudly on display in the study of James’ grandchild Philip.